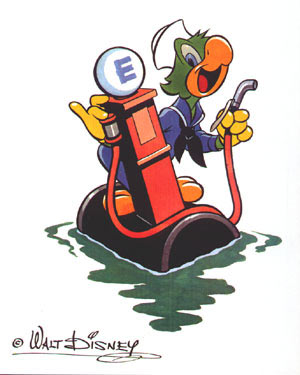 Remember the ESCAMBIA's official insignia, which appears on the cover of our "Escambia Scrapbook"? Here's how it came about. In February 1945, Executive Officer Richard Stephens requested a friend working at Walt Disney Studios to suggest a "trade mark" for our ship. He designed this "floating service station" with a pump and hose on a floating barrel of oil, with Jose' Carioca ready to fuel the next ship coming by. Ken Hackett (CMM) reproduced the insignia on each side of the bridge, where it drew admiring chuckles from the crews of ships we refueled. Jose' Carioca was expected to become more famous than Donald Duck, but Jose' didn't achieve star status -- except on the AO-80! Jose' was the star of the animated movie "The Three Caballeros". Virgil Grier has the original painting complete with some water spots from when our Aerographers Mate failed to notify Ken of the approach of a sudden shower.

Members of the crew of USS. ESCAMBIA (AO-80) earned the following Campaign Medals and Ribbons: